In a few hours I'm going to light a yahrzeit candle for the first time. Tonight is the 9th of Elul, the one year anniversary of my mother's death.

It has been a pretty scary month since I stopped saying Kaddish. Two weeks ago the family gathered in Chicago for the unveiling of the headstone, and since then I've been feeling pretty strange. I'm calmer than I have been in months. I'm getting more sleep. I'm seeing more of the people I want to see more of. I'm riding my bike, and reading interesting books and staying up all night with friends drinking whiskey and laughing. I don't think I'm better, really. I certainly have a lot more "grief-work" to do, but I think that ending Kaddish allowed me to settle into my grief in a way that I never could during the eleven months.
For me, saying Kaddish was really a struggle. It hurt, but it felt important. I guess it was like the intense ache you get in muscles after you work out really hard. The next day it's painful, but also a sign of increasing strength. You're not exactly glad for the pain, but you appreciate that it's necessary for the work you have to do.

I'm glad to have those eleven months over, and I'm glad that after tomorrow night I'll feel free to go to plays, clubs and live music with my friends. But it's really scary and unbearably sad to think about my whole life stretching out in front of me without my mom. I'm going to get married without her and have kids without her. I hope one day I'll have books with my name on them-- and she won't see them.

I'm going out into the rest of my life alone. The yahrzeit is the starting line. Part of me is itching to get out there and run already, after a year of sitting at home. But part of me wants to hide in bed and never come out. I assume that I can do this, but wanting to, really wanting to, is another thing.

*A note about this blog: I'm planning to post a final update next week after the yahrzeit. After that I will start another blog, details TBA. If you have suggestions for a theme for said blog, I'd love to hear them. I'm thinking rainbows and kittens… 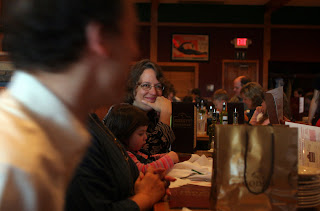 (The photo is my mother on mother's day a few years ago. My cousin Abigail is in the foreground. Photo courtesy of my cousin Joe Nicholson.)
Posted by Tamar at 9:48 PM 3 comments: