There are extensive rules for giving a eulogy, and we touch on them in our article on eulogies, though it's not a comprehensive look at halakhot having to do with a hesped, or a eulogy. I looked through those halakhot before I wrote what I said at my mother's funeral, and was interested to find that we are meant to say things at a eulogy that will "break people's hearts," and make them cry over the loss (Yoreh Deah 344:1). Also, at a eulogy one can exaggerate the accomplishments of the deceased (Rosh on Moed Katan 3:63), though it is a sin to outright lie (Brachot 62a).

These rules only apply to the eulogy itself, but I think about them a lot in terms of how we remember people who have died--how we lionize or demonize them, and how we hone our selective memory so that we come out with a particular understanding of someone who was likely more complex than we imagine.

I struggle a lot with how to deal with unhappy memories of my mother. When I unexpectedly think of one of the really good times--a Friday night in her apartment in Jerusalem, surprising her at home the week after she finished chemo--I get teary, but when I am suddenly ambushed by a memory of a bad time--one of any number of fights we had while I was in high school, or my birthday this year when she said to me, "Don't touch me!"--I think I might just pass out the despair is so great.

I don't know if I'm exaggerating my mother's warmth and love and all of the good things about her that I think about constantly. I don't think so, but I suppose I'm an unreliable source when it comes to these things. I wonder, then, if I'm also unreliable when it comes to the bad things. Were any of them as bad as I thought? If they weren't, as I expect is the case, then I should probably be slapped. Hard.

They say hindsight is 20/20, but it doesn't feel that way. Every memory seems like it should be interrogated--Was the light that warm? Was the hug that sincere and long? Did I really restrain myself from rolling my eyes in that moment?--but I'm not sure where I'm supposed to end up. I want my memories to be of my mother--my real mother, not some idolized version that towers over me, unattainable. But I want it both ways. I'd very much like the bad moments to be packed up in a newfangled Pandora's box, hidden in the back of my closet, never to be seen again.

Last week an older man who I know from various minyanim on the Upper West Side mentioned that he was about to finish his year of saying Kaddish. I opened my mouth to respond and realized I had no idea what was an appropriate thing to say in that situation. Mazal tov? I'm so sorry? I hope this year has been one of healing? In the end I simply said, "I don't know what to say," and he told me it was okay, he didn't know either.

This is not something that I've thought much about, since I'm still so early in the year of saying kaddish, but it has become so central a thing in my life that the idea of stopping, of stepping back from the grief, is terrifying.

It has been an incredibly hard few weeks. I had been doing pretty well, I thought, but then I fell apart, and for more than two weeks I found myself on the verge of tears many many times every day. On the subway, at the gym, at work, in the shower--I just get so sad I can't get a hold of myself. Anytime I think of those last few minutes--the family standing around the bed and holding Eema's hands as she faded away-- I feel like hiding under the covers and never coming out. I am overwhelmed and exhausted by the idea of subverting my grief in order to get through basic interactions with others. Sometimes paying for a gallon of milk without dissolving into tears seems nearly impossible.

And then yesterday, at minyan, a woman was leading davening and she had a yahrzeit for her son, who died five years ago. It was eight o'clock in the morning and the room was perfectly still, everyone trying to make space for the sorrow that rolled in invisible waves off of her body and pushed against all of us. She was a stranger, no one I had ever seen before, but I wanted to tell her, afterwards, how sorry I was. When I approached her, the tears came quick and hot and I was humiliated. One of the things about grief that I find so frustrating is how selfish it makes me. I cannot see past this, I cannot get over myself enough to gently say something sweet to someone else who is in pain.

I've been thinking about all this in connection to Thanksgiving, which is coming up in a week. It's a holiday that's meant to be about being grateful, and about eating with a community of people who help each other through difficult times. This year it seems simultaneously profound and perverse. It's hard to imagine being thankful, celebrating a year of plenty when this year has been so soul-crushingly sad. Yes, we've had plenty of food, and plenty of support from amazing and lovely people, but it's hard to focus on the thanks when everything else is so horrifying. I think thanks is something that you can do effectively when you're either very close to something (thank you for giving me food because otherwise I would have starved) or have a lot of perspective (now that I'm an adult I can appropriately thank you for disciplining me in a way that was respectful and effective). When you're somewhere in between--not super-close , but a long way from having any perspective--it's so hard to be thankful.

Then, this morning, I read this poem. And I feel a little better, though no less confused.

Praise the light of late November,
the thin sunlight that goes deep in the bones.
Praise the crowd chattering in the oak trees;
though they are clothed in night, they do not
despair. Praise what little there's left:
the small boats of milkweed pods, husks, hulls,
shells, the architecture of trees. Praise the meadow
of dried weeds: yarrow, goldenrod, chicory,
the remains of summer. Praise the blue sky
that hasn't cracked yet. Praise the sun slipping down
behind the beechnuts, praise the quilt of leaves
that covers the grass: Scarlet Oak, Sweet Gum,
Sugar Maple. Though darkness gathers, praise our crazy
fallen world; it's all we have and it's never enough. 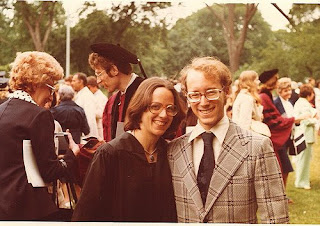 Up until very recently I've been shocked at how simple my grief has been. I'm just sad all the time. There really isn't much more to it than that--just the sadness, like a thin blanket over every day.

But recently the sadness has retreated a bit. I'm doing work I like, living in a nice apartment with roommates I enjoy. I have friends who take care of me, good food in my fridge, and sisters on speed dial. Good days have begun to stack one on top of another, and I feel flustered, confused by the smiles that come easily, the lightness creeping into my chest and behind my eyes. I sometimes catch myself in a good moment and recoil in horror. How can I be happy while the grief still hangs low over my head? How can it be that my mother is dead and I am giggling at a stupid commercial, enjoying a new book, joking with friends over beer and cookies?

I don't expect that I'll be sad forever, but I expected it to be weightier than this, to cling to me more steadfastly than it has.

And then, of course, there is the guilt. Maybe I shouldn't be happy. It is, perhaps, disrespectful to clink glasses and tell dirty jokes and accidentally smear frosting on my face at a party when my mother has been dead for just over two months.

When I am feeling good, when my life seems to have steadied around me, and I am caught up in a simple moment of routine--making the bed, walking to shul, stirring a pot of soup, opening up a newspaper--that is when the sadness rushes back at me like a wave held back too long. There is no trigger, just the sudden ambush of grief as I try to hold myself together, get to someplace private where I can cry and then stop.

I thought it would be more gradual than this, but it's not. On Sunday morning I was in the kitchen making French toast. The coffee maker was mewing behind me, and I stood in the middle of a parallelogram of light that came in through the window and lay like a warm yellow rug on the tile floor. I felt calm and happy, cracking the eggs and whisking in the milk. But then, for no reason, something crumpled inside me. The happiness just gave way. And there, in its place, was the cold clear sadness. For the rest of the day it lurked inside everything.

I was still wrestling with the sadness, trying to keep it under the surface, when I had a discussion with The Boy about going to concerts and performances during this year. Last night one of our favorite musicians was playing, and he wanted to take me. I was also invited to dance at a friend's wedding. I didn't really feel like going to either event, mostly because I couldn't imagine pretending to be happy for very long. For a few minutes we talked about the rules of this year, and why they're hard, but good for me. I think there's too much back and forth this year for those true expressions of joy.

This morning on the subway I was reading a book of poems by an Irish poet named Ben Howard. The book is called Dark Pool, and I had paged through it once before, but the bottom of a poem called "Shutters" caught my eye today.

Where will it end, that cycle of disclosure
and closing-up, advancement and retreat?
Within the moments of your timed exposure

I see a lens preparing to be shuttered,
as though the truest movement of your heart
were systole, your truest words unuttered.