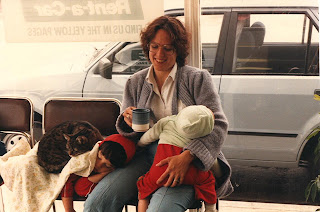 I’ve always been a person who stands during the mourner’s kaddish. My father always stands, so I always have, too. I actually stand for any kaddish, which means that I hear ‘yitgadal’ and automatically get to my feet. Maybe it’s because there are so many permutations of the kaddish in every service, but for some reason I’m still sometimes surprised when we get to the mourner’s kaddish. Occasionally I miss the first few words because I’ve been zoning out, or I wasn’t done reading whatever came just before it, or I was waiting for someone to say, “Mourner’s Kaddish, page 81.” In any event, it sometimes takes me a few seconds to catch up to the other people saying the Kaddish, and it’s unnerving and embarrassing when this happens.

I am not used to being a mourner yet. It has been over a month, but I’m really not accustomed to this new frame of mind.

I’ve been thinking a lot about the placement of the mourner’s kaddish, the way it comes at the very end of davening, as a final period to the whole service. Logistically that makes a lot of sense to me. Mourners can show up pretty late to davening and still fulfill their obligation. But more often than not it seems like the kaddish is something we’re trying to get through so we can be done already. People are packing up their tallitot, and whispering, and as soon as kaddish is over there are the inevitable and boring announcements. Somehow the kaddish has been unmoored from the rest of davening, and I find that disconcerting. Of course, it does feel isolated to be a mourner, but isn’t the whole point of the kaddish that even mourners still believe in God, that they have to continue to proclaim their faith and their steadfastness in the community even when it feels a little disingenuous?

There is, of course, a kaddish much earlier in the service, and I like that one better, though I don’t always make it to shul in time to say it. I think sometimes I’m more ready to say the words early on in the service. By the time I’ve gotten to the end of davening I’m worn down by the whole thing, the hugeness of my faith staring at me as I try to say words I have trouble believing. And the members of the minyan are beginning to shift their focus to whatever comes next in their day. But that first kaddish is easier. It’s like a gulp of fresh air taken before a sprint. Frightening, but instinctual. I’m always ready for the kaddish in the middle of services, and I never feel ready for the one that comes at the end. I wonder if I ever will.
Posted by Tamar at 9:34 PM