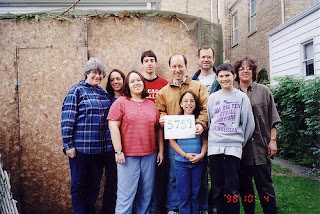 This morning I went to a different minyan than usual because it was a friend's last day in NY, and I promised I'd show up at the shul he usually goes to for minyan, even though they were starting forty minutes earlier than the place I usually go, and was ten minutes farther away. When I arrived, I was only the sixth person in the room, and because it's a Modern Orthodox synagogue, I didn't count towards the minyan anyway.

It took another twenty minutes before we finally had ten men, and though we did move forward in the davening while we waited, I spent those twenty minutes paralyzed with fear that we wouldn't have a minyan, I wouldn't be able to say kaddish, and I'd have to try to run to another minyan once we finished.

I hadn't thought about this much up until this point, but one of the things that I like about saying Kaddish is the way it forces you to depend on your community. You have this obligation, and in order to fulfill it you have to get nine other people to help you out, and fulfill an obligation of their own.

Sometimes grieving feels so private that it can seem bizarre to have to say Kaddish in front of a group of people. But having those people around forces you into a community, forces you to care about other people when you might otherwise be consumed with a more selfish and all-encompassing grief. It's not fun, really. Waiting for a minyan can actually be quite stressful, but I think it gives a new perspective in a time when it's easy to be too inwardly focused.
Posted by Tamar at 12:06 PM